Practical self-defence applications exist for all the movements of the Tai Chi Hand Form – in our martial classes we drill these movements repeatedly to develop them as reflexive responses. This practice can be done slowly to develop technique, and later more energetically to simulate a realistic self-defence situation or for pushing hands/sanshou competition training.

Video of fixed step pushing hands training with class members Debbie and James – and clips of application of these grappling skills to set up striking and throwing in sanshou competition by Chris and Vince.

The video below shows members of our club taking part successfully in national Pushing Hands competitions.

After an energetic training session in our martial classes, we cool down by performing the Tai Chi hand form.

Taking 15-20 minutes to perform in total, the slow movements effectively perform the function of a therapeutic warm-down, encouraging the muscles and joints to move through their range of motion while operating at a reduced intensity. Meanwhile, one gains all the other benefits of practising the hand form – one works through an efficient template of the style’s martial movements while training balance, co-ordination and focus.

The tiredness experienced after expending energy in pushing hands practice and sparring also helps encourage relaxation and use of minimum muscular tension, which also benefits one’s practice of the form.

Below are some photos taken during a martial class (photography by Steve Musselwhite).

The video clip below shows two members of the student class working on some striking combinations (punches, knees and elbows) using pads.

Dave and Vince demonstrating the form and application for the move Sweep Lotus Leg, including some footage of this technique being applied in Sanshou competition by Vince.

Dave and Vince demonstrating the form and application for the move Brush Knee Twist Step, including some footage of this technique being applied in sanshou competition by Vince and Chris.

While much is made of using Yin (softness) to overcome Yang (hardness) in Tai Chi literature, the converse is also true.

When the opponent’s defence is weakened, the Tai Chi practitioner can take the initiative to attack strongly (Yang) to overcome the opponent’s weakness (Yin). 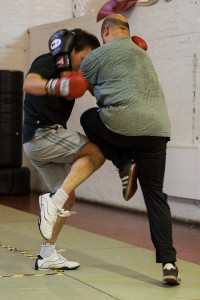 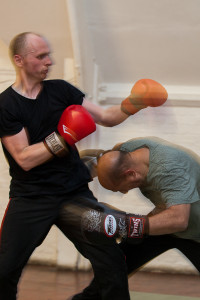